MINNEAPOLIS: A Minnesota man whom authorities describe as a self-proclaimed member of the anti-government boogaloo movement and had an interest in killing police was charged Wednesday with illegal possession of a machine gun.

A federal magistrate judge ordered Michael Dahlager, 27, of St. Cloud, to remain in custody until a detention hearing scheduled Friday. Dahlager’s court-appointed attorney, Robert Richman, told The Associated Press in an email Wednesday evening that he had not yet met his client and knows nothing about the case.

The complaint states that Dahlager told a confidential informant he was preparing to defend a rally at the state Capitol on Jan. 17. Dahlager allegedly traveled from St. Cloud to St. Paul in December 2020 to conduct surveillance at the Capitol building during a Stop the Steal rally by Donald Trump supporters. He scouted police numbers, overwatch positions and streets blocked by law enforcement, among other things.

Dahlager told the informant he wanted to commit suicide by cop and would not wear a bulletproof vest, according to the nine-page complaint, He said he would go out fighting and go hunt some pig.” Eventually the plans for Jan. 17 were called off because of fears the group had been compromised by an informant.

Dahlager is accused of showing the informant several tactical items, including body armor, an AR-15 style assault rifle with a folding stock, and an item Dahlager claimed was a suppressor. The complaint said Dahlager also brought out two so-called auto sears meant to convert semi-automatic weapons to shoot automatically by a single pull of the trigger. Dahlager said a friend had created the auto sears with a 3D printer.

Read all the Latest News and Breaking News here 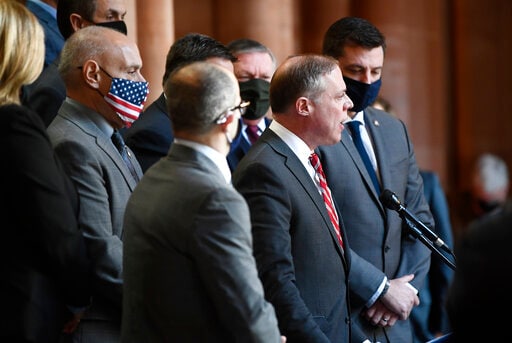 Ukrainian Tycoon Banned From Entering US For Corruption